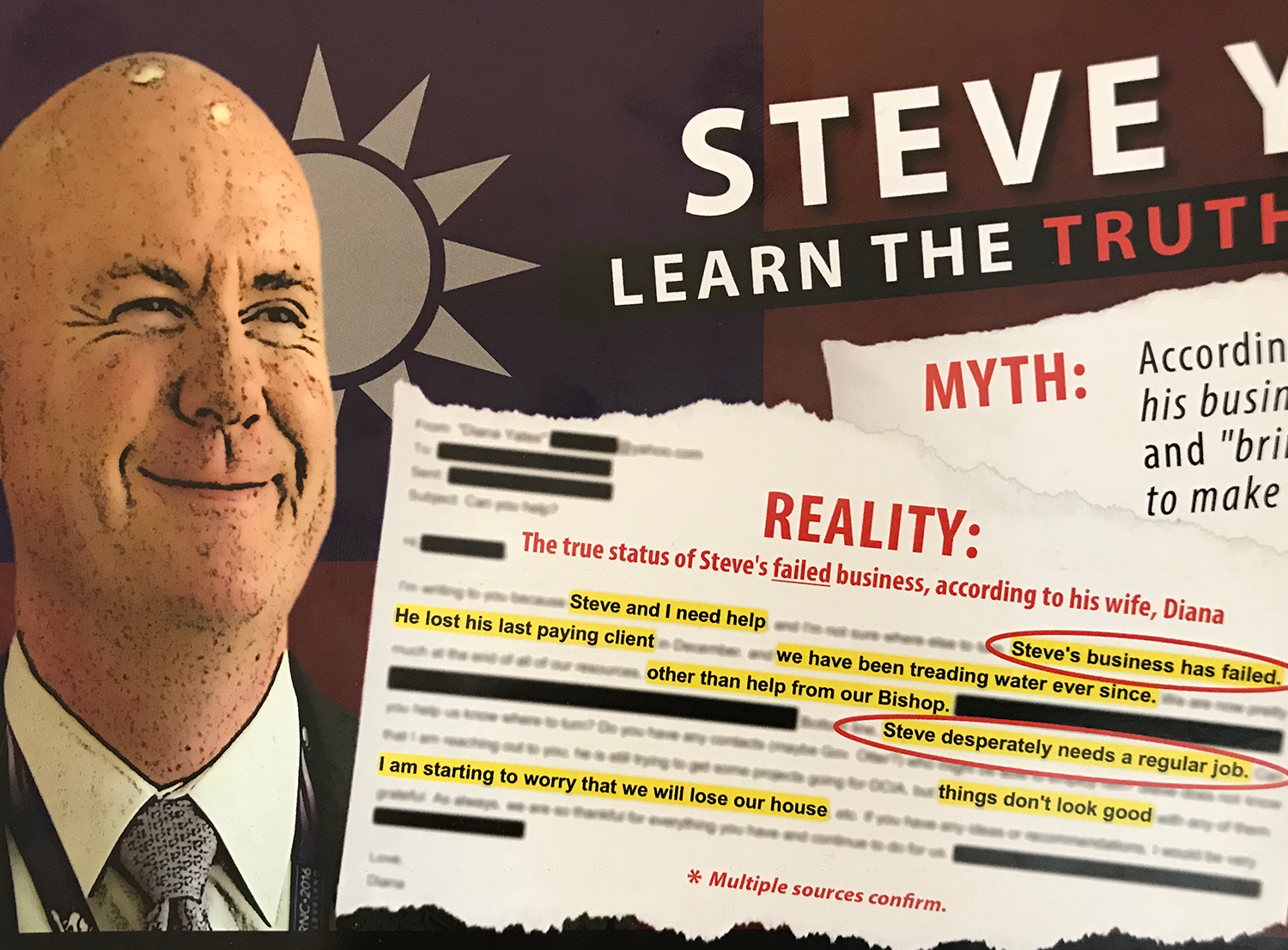 IDAHO FALLS, Idaho – A statewide, smear flier aimed at Lt. Governor candidate Steve Yates is finding its roots in east Idaho after a political activist admitted to forwarding an email from her now-deceased mother’s email account.

“The true status of Steve’s failed business, according to his wife, Diana,” the mailer reads with a blurred out and redacted image of the email. Phrases used on the flier include “Steve and I need help,” and “Steve business has failed,” followed by, “Steve desperately needs a regular job.”

The email was originally sent three years ago by Diana Yates to Sheila Olsen, a well-respected member of the GOP in east Idaho who recently passed away. Maria Nate, wife of Idaho District 34A Representative Ron Nate, said she accessed the email in 2016. While Nate said she had permission to access her mother’s email, Olsen was not aware Nate had forwarded that specific email.

Maria Nate talks with Neal Larson and Julie Mason on KID Newsradio about an email she forwarded that now appears on a statewide flier against Lt. Gov. candidate Steve Yates

Nate declined to say who she sent it to, but acknowledged she is “equally sickened by what is happening right now.”

Mike Duff, the author of the mailer and a major donor to the mailer’s official sponsor, the political action committee Idahoans Fighting Corruption, was less sympathetic towards the situation. Duff emphasized multiple sources had confirmed the information contained in the flier about Yates’ business struggles, but would not name any specifically saying there were “too many to put on a card and too many to talk about.”

Mike Duff responds to questions from Neal Larson and Julie Mason on KID Newsradio about his authoring of a smear flier against Lt. Gov. candidate Steve Yates

Duff also maintained people were missing the point of the mailer, getting wrapped up in the controversy surrounding how the information was obtained rather than the information itself.

Far from regret, Duff instead continued to emphasize how important it was people have access to the information in the flier.

“Now people won’t be in the dark,” Duff said. “If you look at the flip side of the card, there’s all kinds of information there that Steve Yates [is] corrupt from his personal biographies and resumes and things that are also true and verified and all you have to do is follow the information.”

Nate continued to deny her role in the flier and denounced the effort, offering her sincerest apologies to Yates and his family. But, Nate also asked voters to not blame her husband, who is currently up for re-election. Accepting 100 percent responsibility, Nate reaffirmed that she and her husband are far from involved in the Lieutenant Governor’s race and winning races should be done on the foundation of issue-based disagreements and not personal attacks.

“This is on me,” Nate said. “This is me, Maria. This is not a reflection of my husband who has nothing but integrity… I am so sorry if this blows back on him because this is not who he is.”

As for Steve Yates, he responded to the flier saying it was sent out with “exceedingly questionable ethics.”

“This is actually not a personal matter between people who feel like feelings have been hurt,” Yates told KID Newsradio. “So, I can appreciate the anguish that Maria and others may feel about the misjudgement of going into private emails and making them into something public. At the same time, there is no remedy for something like this and so when you play with nuclear politics, sometimes this collateral damage is quite significant. Hopefully, it’s a cautionary tale.”

You can watch the whole hour on The Neal Larson Show unfold with Mike Duff, Maria Nate and Steve Yates’ phone calls, below.

After a short three-second burst of classical music over my phone earpiece, all I heard was “The mailbox is full.” It was just the latest of several attempts to get a response from Paulette Jordan, […]

POCATELLO, Idaho (AP) — Federal authorities are confirming that a cyanide trap intended to kill coyotes in eastern Idaho instead killed a dog in an incident the local sheriff also says injured a 14-year-old boy. […]