IDAHO FALLS, Idaho — With the end of the school year, graduates across the state are celebrating the end of the educational career and one high school janitor decided he’d join the ranks of graduates too.

Richard Fernandez, a janitor at Shelley High School, decided to retire this year after over two decades of work at the school. 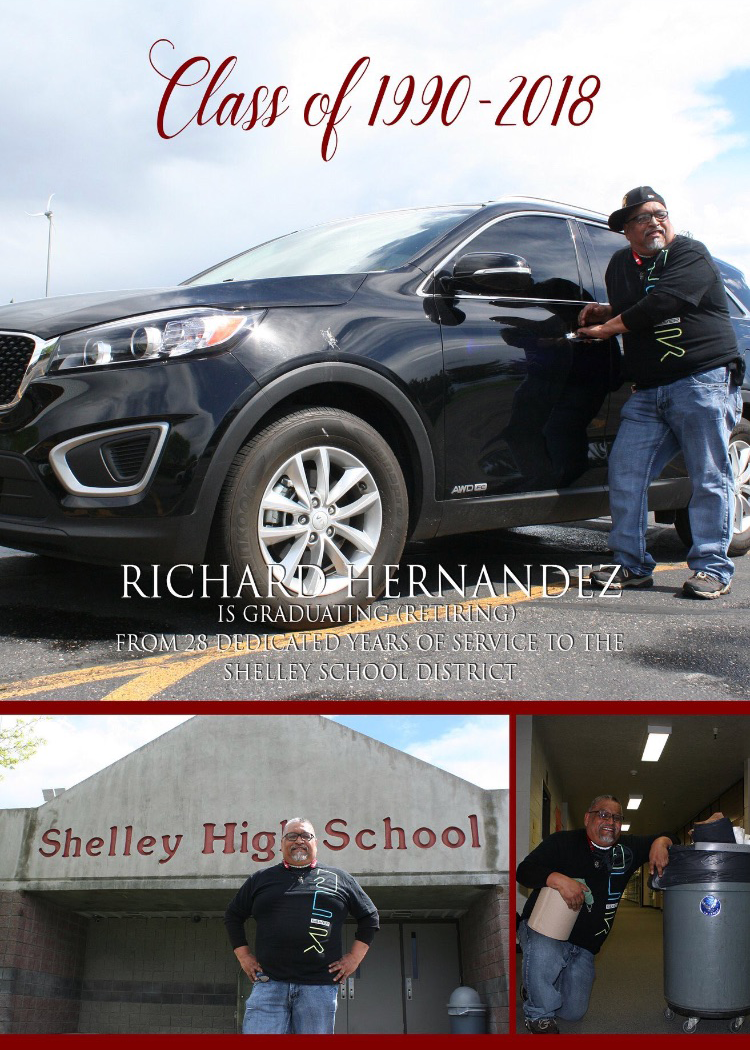 While most would retire with cake and conversation with co-workers, students at Shelley High School wanted to do something more. Fernandez said a student approached him and suggested he join them as graduates of 2018.

“He said, ‘We need to make you something for retirement,’ and I go, ‘Well, what’s that,’ and he goes, ‘We want to put your card up there to put with our graduation class and put it up on the bulletin board we have in the hallway,'” Fernandez said.

Fernandez struck a pose and took those classic senior pictures. It wasn’t long before his announcement joined the seniors’ pictures in the school hallway; a tribute to the man who did more than clean the school, he become a mentor and friend to many.

“I was talking to a couple of friends that were just gloomy, you know, gloomy and I said, ‘Well, you know, what can I do? Is there anything I can help you with,'” Fernandez said. “[They said] ‘No, I just needed a friend,’ I said, ‘You talk to me anytime,’ and we joked around and talked for a long time and the next thing you know, he took off just smiling, on cloud nine, just happy as ever.”

As to Fernandez’s view about his impact of the students he’s associated with, he said he hopes they continue to succeed and change the world around them.

“I just want the class of 2018 to know how much I love them,” Fernandez said. “Everybody helps everybody. Everybody respects everybody. That’s what you want to teach them, is just to love and respect, have peace of mind and just be able to able to grow with everybody.”

Idaho Weeks Away From Being Gas-Producing State

BOISE, Idaho (AP) — Idaho is just weeks away from getting a new title: oil- and gas-producing state. Lawmakers and regulators for the last four years have been trying to prepare and earlier this year […]