SEATTLE, Idaho — Taxes on are the rise again in Seattle, Washington.

The tax rate of almost $.2 per fluid ounces may not sound like much, but ask consumers as a local Costco and the tax really packs a punch to their pocketbooks. 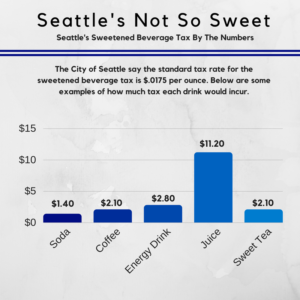 One Facebook user sent KID Newsradio an image of a sign in a Seattle Costco detailing how the new tax would impact buying a case of Dr. Pepper.

After the sweetened beverage tax, an added $7.56, makes the new price almost $20.

“I am from the Seattle area and seeing this makes my head explode,” a Facebook user wrote to KID Newsradio. “I am an adult my mommy doesn’t need to watch over me neither does my government. It is not the governments job to tell me what I can and cannot eat or drink or punish me for doing something they personally don’t agree with.”

The same sentiment was echoed throughout circles of consumers, beverage distributors and businesses in the city.

“Are you kidding,” a Twitter user wrote. “Check out these prices at Costco now that the Soda and #SugarTax has taken affect in the Seattle area.”

ARE YOU KIDDING?!?! Check out these prices at Costco now that the Soda and #SugarTax has taken affect in the Seattle area. 1.75 cents per fluid ounce. Pics @DevinSenaUI & @HaydenBedsole pic.twitter.com/RcsPY4e8L4

The rules are tricky, though. Diet coke and lattes are free from the bonds of taxation. But, that doesn’t mean the City of Seattle will lose out on any revenue though. According to the Seattle Times, the new tax will potentially bring $15 million to the city’s coffers.

City officials say part of that revenue will go towards government programs, but how much households will see leave their bank accounts remains to be seen.

Twitter’s recent decision to begin shadow banning users without them knowing sparks a conversation between Neal and Julie about the power corporations wield to shape our society on social media. Julie and Neal weigh in […]

The Neal Larson Show – The Death of Journalism, Lady Doritos and the Bitcoin Bubble

Neal and Julie lament the perverbial death of journalism as he recounts a story of a journalist essentially mocking people for celebrating the average $1,000 tax payers are expected to see following the tax reform […]

WASHINGTON COUNTY — Health officials confirmed Wednesday morning that a Washington County woman has been infected with the mosquito-borne illness West Nile virus. The infection marks the first human case in Idaho so far this […]