POCATELLO — The Pocatello Regional Airport broke it’s own record for passengers in 2017, making it the second year in a row the airport has not only seen increases in customers, but breaking it’s own record as well.

“We used to use a 30 seat aircraft equipment that was here, they had three flights a day and that would have been 90 outbound seats,” David Allen, Pocatello Regional Airport Manager, told KID Newsradio. “Then they went to a 50 seat jet…so they were able to take our same volume of traffic in two flights.”

Allen also says SkyWest’s decision to increase the number of flights out of the airport combined with the bigger capacity aircrafts pushed their passenger departures and arrivals to 78,270, a 16 percent increase Allen says. 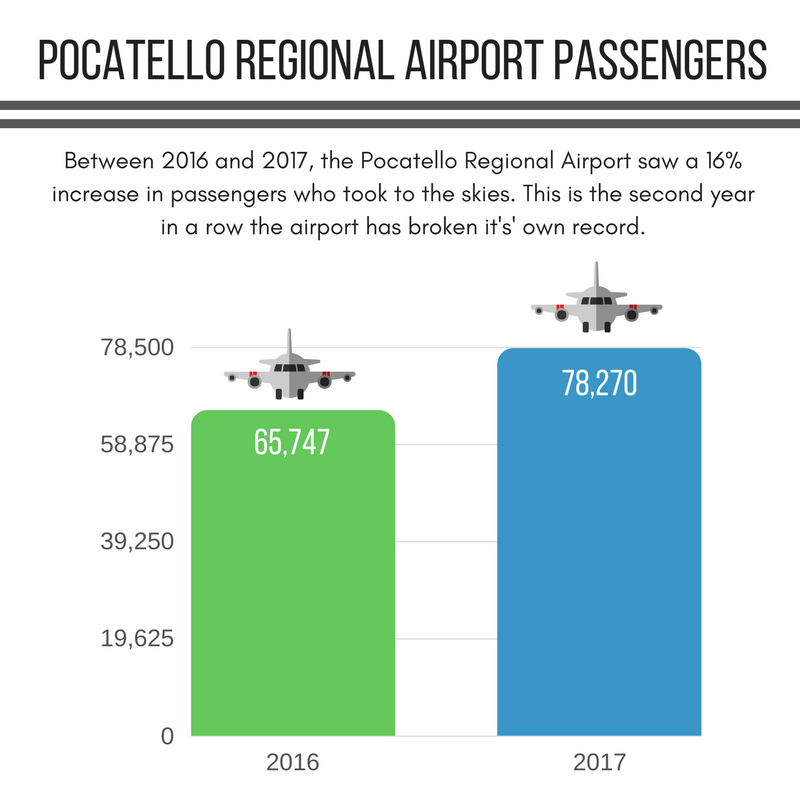 “I think [the record] will be broken again because we just added 35 percent more seats available,” Allen said. “When we started this two years ago, we did a passenger study and determined we were only capturing 16 percent of our own market. Most of that traffic is they were driving to Salt Lake and flying out from Salt Lake, some of it was driving to Idaho Falls.”

With Idaho Falls Regional Aiport just over an hour away, Allen says Pocatello has been able to bring clients from both Pocatello and Idaho Falls to their airlines.

“Are we capturing traffic of our own that used to go to Idaho Falls and we capturing any of their traffic,” Allen said. “I think the answer to both of those is yes, we’re able to reclaim some of our traffic that had been leaking to Idaho Falls in the past and then because our fares are typically significantly lower than the Idaho Falls fares at this time, we’re attracting some of their more price conscious travelers.”

Allen says he’s scheduled a new passenger study for next year to further examine the growth of the airport.

BOISE, Idaho (AP) — The Idaho Senate has killed a proposal calling for a constitutional amendment to limit federal government spending power. Supporters had hoped Idaho would become the 30th state to call for a […]

SHELLEY, Idaho — The Shelley community is grieving once more after the sudden death of a local teen in car accident on Thursday, June 14. “Olivia Johnson, daughter to Jake and Traci Johnson, and big […]