IDAHO FALLS, Idaho — Thousands of east Idahoans filled auditoriums this week as a local teen’s senior project aimed to educate parents and teens about the dangers of social media.

Sydnee Speirs, a senior at Thunder Ridge High School, teamed up with self-proclaimed social media activist Collin Kartchner to help parents and students become aware about the impact social media is having on young minds across the world.

“I’ve noticed it in my own life, and I know that it’s not only me, and I know that there’s lot out there too,” Speirs said. “Especially as I was reading things that Collin was posting of assemblies that he was going to and the schools that he was at with these kids responding to him…and I was like, ‘Okay, if they feel that way, I know I feel that way and that there’s so many others that would too.’ So, that’s when we were just like, you know what? This would be such an amazing project to do.”

Kartchner, who originally started as an Instagram personality known for mocking blogs and social media habits, said he’s seen the negative impact social media is having on teens and children. East Idaho parents and students heard that personal message from Kartchner himself at several assemblies and events throughout the region.

“One of the biggest problems we’re facing is that our young people are a lot of them are in the huge, deep emotional pain right now and in crisis,” Kartchner said. “Where I live…in Salt Lake and Utah…since 2011 when all this stuff came out, in seven years, our youth suicide rate has jumped 141 percent. We had a school just last year, one high school, we lost seven kids to suicide.”

Kartchner said when he’s talked to the friends and parents of these teens about what lead to their loved one’s death, the message has been consistent and clear: social media, and in some cases, cyberbullying.

Sydnee Speirs said she’s seen the negative impact of social media on a personal level while using the app Snapchat.

“It’s shows like a map where it’s so whoever allows it, you can see where every single person that you have as a friend on snapchat is,” Speirs said. “Well, thinking that, ‘Oh, they’re my close friends,’ you could then look at the map and see these groups of people all together in a certain area and go, ‘Why was I not there? Why was I not invited?” It kind of can get at you and wear you down and it just really eats away almost at you.”

As a parent, Erika Speirs, told KID NewsRadio she saw a similar feeling among her children’s friends. 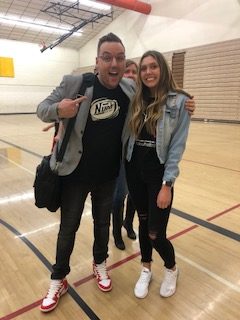 “They would hang out and they would all have their phones and kind of be lonely and using their phones kind of forced socializing and you could see that it was not fun for them,” Erika Speirs told KID NewsRadio.

Curbing social medias’ encroachment starts at home, Kartchner said. Instead of parents tackling the problem alone, entire families can and should walk hand in hand toward a path free of social media addiction.

“As parents we have to put our egos away and say, ‘Look..we had no idea what this tech could do. We have no idea to Snapchat had this stuff. We had no idea that Instagram is the number one worst app rated for teenager mental health.'” Kartchner said. “Come up with a family tech contract. You can customize it to your own family and they can look different for your eight and nine year old, and your 13 and 14 old, and you’re 17 and 18 year old. They need to look different…don’t make up the rules and then give it to your kid.”

“Parenting has to stop being a popularity contest,” Kartchner said. “We have to stop being afraid of our kids, and we have to be humble and say, ‘Look, I had no idea what was happening. So, help me be your dad. Help me reel this back in and we’ll do it together.'”

Since listening to Kartchner , both Erika and Speirs say they’ve made changes to their social media habits. Sydnee said she deleted her Snapchat account and is reengaging with the people around her. Erika said she is taking time to see who she’s allowing to influence her on her social media channels.

“Parents are just as at fault as some of these kids,” Erika Speirs said. “So, I started recognizing that, and so you go through and you look at different followers that you’re looking at and decide if they actually are making a difference in your life for the good.”

Social media doesn’t need to be totally abolished or abandoned. Kartchner pointed out an increasing amount of schools are giving students as young as second grade Chromebooks and households across the nation have multiple devices within easy reach of all age groups.

“The screens are typically the number one problem in the home with parents,” Kartchner said. “It’s a constant fight. It’s a constant struggle…We have to have these conversations and we have to take back our kids’ childhood.”

Kartchner will be holding assemblies in Shelley on Wednesday, January 9.

IDAHO FALLS, Idaho — Midterm elections are well under way and as voters head home from the ballot box, many will be looking to see how the results pan out. Below are resources for this […]