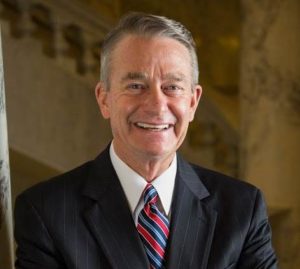 Brad Little currently serves as Idaho’s lieutenant governor. Before his appointment to fill Senator Jim Risch’s seat after Risch resigned to become a U.S. Senator, Little served in the Idaho Senate. He spoke with Neal Larson KID Newsradio about his bid for Idaho’s top seat, how he hopes to address gun control and school safety.

You can listen to the full interview below:

IDAHO FALLS, Idaho –As the primary elections marches closer, the candidates are buckling down and traveling the Gem state working to persuade voters and talk about important issues.

Lieutenant Governor Brad Little is among the gubernatorial hopefuls and is taking some heat on the campaign trail after the Alquist campaign launched a political ad attack against both Little and Congressman Raul Labrador.

“That will happen in a campaign,” Lieutenant Governor Brad Little, who running for Idaho governor, said. “Our strategy is to talk about the issues and if we’re forced to counter-punch we will but there’s still some 50 days left and you know people ask questions about it.”

Little said there’s still enough time in the campaign to address any concerns voters have and he’s happy to address those, but also wants to continue to talk about the message he feels is most important to Idahoans like boosting Idaho’s economy.

“There’s nothing I’m ashamed of, so we’re talking about the message and I believe most people believe as I do that the most important thing we can do is create an atmosphere where our kids want to stay here.”

Little is also addressing other issues many people across the country are concerned about, including east Idahoans: gun control and keeping kids safe as school shootings continue to dominate the headline.

“The state has been continuing to invest in hardening our schools and we can harden them from a physical standpoint; locks, security and cameras,” Little said. “We can harden them from another matter than that’s make sure we’ve got enough mental health awareness that these kids that are having problems, you know, that they’re recognized early.”

But Little also says it’s important to look at changing how many students are in each school rather than change how people can use the second amendment of the Constitution.

“One thing that I’ve advocated for my entire career is…that we not make schools too big,” Little said. “If you’re going to put in a new high school, the option ought to be there to break it up into smaller units, smaller pods. There’s good research on this.”

Smaller groups means more personal engagement and less of a chance kids that need help fall through the cracks since there are more opportunities for teachers and others to recognize issues before they turn into a bigger problem.

“There are things we absolutely need to do,” Little said.

BOISE, Idaho (AP) — Gov. C.L. “Butch” Otter has vetoed a bill that would have required Idaho sign language interpreters to get a state license. The plan aimed to stop unqualified interpreters from causing miscommunications in important situations, like […]