Gregg Losinski works with the Idaho Department of Fish and Game and is the region’s resident bear expert. He spoke with Neal Larson on KID Newsradio about a recent string of bear interactions and what the public should do in the event of a bear encounter.

IDAHO FALLS, Idaho — When it comes to bears, Greg Losinski says Idaho is home to its fair share.

“What people need to realize is when it comes to bears, Idaho has a lot of them, especially black bears,” Gregg Losinski from the Idaho Department Fish and Game told KID Newsradio.

Losinski says Idaho is home to an estimated population of 20,000 black bears. With that many bears, it’s no surprise the public may come in contact with the species a time or two.

Recently, officials euthanized a bear after it continued to interact with people by rubbing up against a woman and even woke up one woman by putting its mouth over its foot.

And while the recent string of bear encounters in Idaho and surrounding states have not resulted in any fatalities, but Losinski says the incidents provide a good reminder about the difference in black bear and grizzly bear encounters.

“Playing dead if a grizzly bear is about to attack you is what you literally do,” Gregg Losinski, Idaho Department  “Black bears you don’t do that. Black bears have a different psychology in that they’re not top of the heap so to speak and if they think something is giving into them or that they’ve won, they don’t just bite it and walk away like a grizzly does…a black bear will just start gnawing on you.” 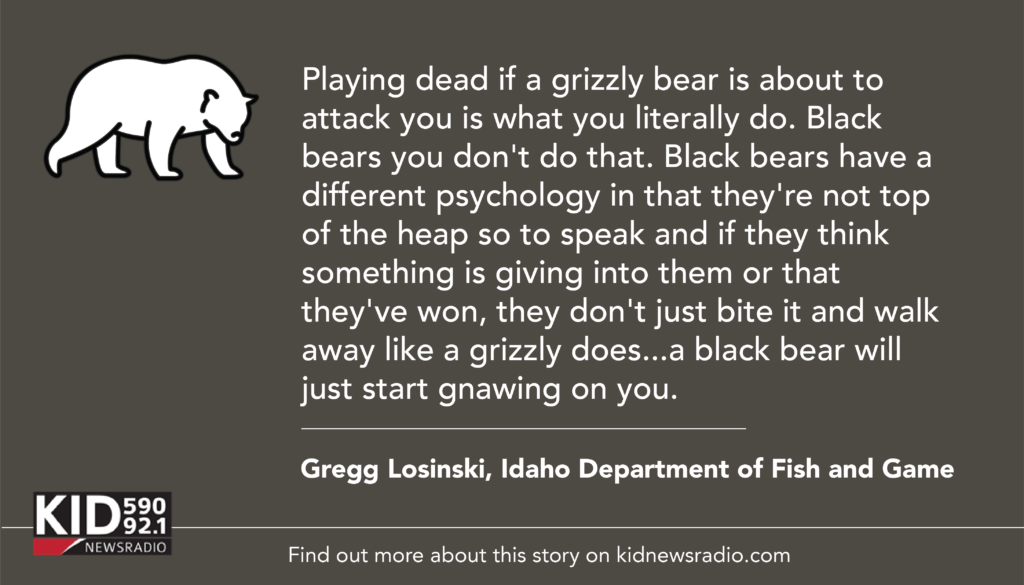 Losinski says the best way to deal with a black bear is to scream, fight and punch. Anything that lets the bear, “know that you’re the boss,” is best when defending oneself against a black bear.

Above all, Losinski says never to run from a bear.

In addition to physical responses like screaming or fighting, bear spray is also a very effective method of defense. Bear spray does expire, but Losinski says the dates written on the cans aren’t a guarantee. The best way to determine whether the spray is still useful is to write the weight of the can when first purchased on the bottom and if the weight changes significantly, that’s when concerns about effectiveness are valid.

Losinski says sprays that have expired can be taken to Idaho Fish and Game for safe disposal.

Above all, Losinski says where bears roam is easily facilitated by the people around their habitats.

“They will expand to wherever we allow them to, if we don’t allow them then they won’t expand, it’s that simple.” Losinski said. “Bears can live anywhere we let them.”

Boise —The chairman of the Idaho Democratic Party is resigning. Chairman Larry Kenck says he needs to focus on his health and will resign as of May 29. The party’s Vice Chair Jeanne Buell will […]

BOISE, Idaho (AP) — A northern Idaho lawmaker has introduced legislation to change the state’s 70-year-old system of doling out liquor licenses. Under Idaho’s current law, a single liquor license is allowed for every 1,500 […]