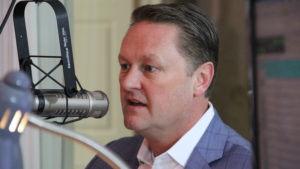 Tommy Ahlquist is a candidate for Idaho governor with an extensive medical and business background. He joined Neal Larson on KID Newsradio to talk about his latest campaign strategy, gun control, sex education in the Gem state and efforts to legalize CBD oil.

“We’ve been at this for 14 months and they’ve certainly been after me for 14 months,” Tommy Ahlquist, a candidate for Idaho governor, told KID Newsradio. “I’ve got a great campaign team and we’re pushing back on their record and unfortunately, a lot of people don’t like that, but it’s been part of politics, it’s been part of the campaign all along. I think that it will probably only get a little worse through the end. I don’t like it either, but it’s politics. But my message stays very positive and most of our message has been very positive, but we will need to expose some records and contrasts so people can make a choice, that’s what this election’s all about.”

Of course, Ahlquist’s campaign tactics aren’t the only things voters are asking about. After a school shooting in Parkland, Florida, many Idahoans want to know what Alquist plans to do to keep their students safe if elected governor.

“We’ve had a moral breakdown of society, we’ve got mental illness, we’ve got glamorization of violence in America and we need to have our school’s be safer, but it seems like the media and everyone wants to go create a bunch of new gun laws and blame it on guns,” Alquist said. “So, we talk about that a lot and I think after going through those discussions in almost every meeting, in Idaho I think we can do a really good job of helping that narrative around the country and start addressing some of the underlying issues that are really causing this problem.”

Ahlquist said his medical background has given him an unique look into the impact of gun violence and it’s that experience that motivates his beliefs about what must be done to increase gun safety.

“When you see that firsthand, it is good people with guns that will stop bad people with guns and we need to make sure that we remember that,” Ahlquist said. “We have a very safe state in our state because of that.”

But questions surrounding Idaho students don’t end with gun safety. After a recent bill aimed at changing a decades old sex education law in Idaho failed to make it out of the Idaho legislature this session, many say the battle over sex education language is far from over. Ahlquist said if elected governor he will veto similar bills and efforts to remove parents as the primary educators of sexual topics within their families is a little change that could lead to a bigger thing.

“We’re under assault,” Ahlquist said. “If you look at the liberal left in this country and what they’re trying to do attacking our families and our values, it’s serious. If you look at these gender equality discussions that are going on everywhere, the money that is being pumped into our colleges and our high schools trying to push this agenda, we have got to stand strong and we have got to stand for what this country and this state is built on and not fall prey to this.”

RIGBY, Idaho — A 12-year-old Idaho boy is in critical condition after suffering life-threatening burns on nearly half of his body. Braxton Bigelow was injured during a lawnmower fire at his Rigby home last Monday. […]