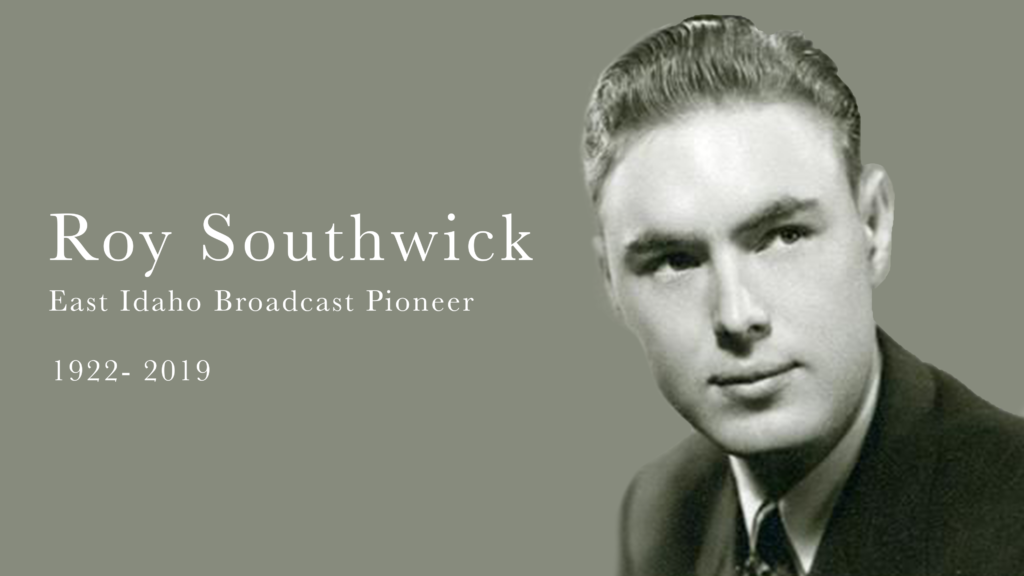 “In each of our lives, we encounter an exceptional person who will be remembered as a fine human being.Roy Southwick was just that type of a person,” Bob Ziel, former KID NewsRadio radio personality said. “Many moons ago when KID Broadcasting Company was one big happy family on 17th Street with television, AM and FM radio under one big roof, I came to know Roy not only as fellow broadcaster, but also as a good friend.”

Southwick’s journey into radio was a happenstance situation, but one that would impact the region for decades to come. After serving in the armed forces, marrying his sweetheart Doris and working on the local railroad, Southwick’s wife encouraged him to try working at the local radio station, KID NewsRadio.

“It was in the KID building on Broadway [in Idaho Falls],” Roy Southwick told KID NewsRadio in a 2019 interview. “[The program director] Gene Ackerly came out and he said, ‘How would you like to try out for a radio announcer?’ I said, ‘Sure!'”

Ackerly asked the young Southwick what he could do, to which Southwick offered up his singing voice. After favoring the radio program director with a small tune, Southwick tried reading a radio script and before he knew it, Ackerly had offered him a job as the weekend announcer between the variety of productions and shows on KID.

“Radio had dance orchestras always on weekends and that’s where I was working,” Southwick said. “We had Les Brown, the Band Renown, Red Skelton and shows at night like Only The Shadow Knows and stuff like that.”

Within a few years, Southwick went from a weekend radio announcer to program director at KID NewsRadio. It wasn’t long before Southwick diversified his radio career with television.

“After those first six years, that’s when we went on television,” Southwick said. “I didn’t know anything about television. So, they sent me to Salt Lake to learn about television…came back and I was the operations manager and the program director for TV, having had no experience other than visiting stations.”

Southwick was a quick study though and in short order, east Idaho’s one television station was exclusively carrying each of the available stations.

“I was the first man on television and we were the first television station one month after Boise put theirs on the air,” Southwick said. “We went on the air with CBS, NBC, ABC and DuMont…for 10 years we had an exclusive to all those stations.”

Throughout his career, Southwick’s passion for broadcast was contagious. According to his obituary, he often remarked, “I never have had a day that I wished I didn’t have to go to work.” Southwick’s dedication to his craft impacted individuals and the entire region alike.

“I was a rooky reporter in the TV field at that time,” Ziel said. “Roy would give me top-notch advice, which only a pro of his caliber could offer to a novice…Roy was a pioneer in the broadcast field here in the Upper Snake River Valley.”

Roy L. Southwick, 97 years of age, passed away in good health, at his home, surrounded by his family on March 5, 2019. Dad was born January 11, 1922, in Ammon, Idaho, to Alfred Leroy Southwick and Pamelia Losser Southwick. He was raised on a farm, which is presently known as the Southwick addition, in Hillview.