Widget not in any sidebars

The East Idaho Eclipse Podcast is a podcast about everything East Idaho is doing to prepare for the upcoming total solar eclipse that crosses America on Monday, August 21st, 2017.

…and anywhere else you get podcasts. 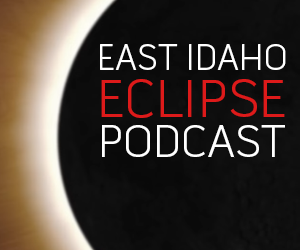 In this episode we hear from two millennials about what life is going to be like without the internet and cell phones. Shelby Boyce and Sydney Jensen give us life hacks for surviving the potential technology blackout due to increased strain on the bandwidth available in the area. We also chat with Hugh Hudson, a Research Physicist and Honorary Research Fellow in Glasgow, UK, about his involvement in the UC Berkeley and Google Eclipse Mega Movie Project. And in the third segment of the episode we hear about the preparations in place for Bonneville County from Sergeant Bryan Lovell with the Bonneville County Sheriff’s Office. […]

In this episode of the East Idaho Eclipse Podcast, we’re listening to you – East Idaho residents! We get to hear your first impressions about the upcoming eclipse. Some of you called into the Neal Larson show and some of you talked to us on the street. We also chat with Chip Schwarze, CEO of the Greater Idaho Falls Chamber of Commerce about the steps that Idaho Falls is taking to prepare itself and its citizens for the big day, the weekend ahead of it, as well as the few days afterward. They’ve put together a great website with a lot of fantastic information – http://eieclipse.com. […]

In the first episode of the East Idaho Eclipse Podcasts we break down everything there is to know about the Great American Eclipse. We get the answers to a lot of questions. What is a total solar eclipse? How often does it happen? How can you view it safely? What kind of weird phenomenon happen during an eclipse? Besides the eclipse, what else should we be looking for? What can scientist learn from the eclipse? And many more.

In this episode we hear from Dr. Rick Fienberg of the American Astronomical Society, Michael Zeiler from GreatAmericanEclipse.com, and Dr. Brian Jackson from the Physics Department at Boise State University. […]