“We’re finding that more and more individuals are looking at social media to sell their products that they’re making at home,” Kellye Eager, the Environmental Health Division Director for Eastern Idaho Public Health, told KID NewsRadio. “It could be anywhere from your basic cookies to foods that are concerning to us, especially where it’s dealing with time, temperature control for safety; so, foods that are made with meat, maybe some certain vegetable products.”

Eager said the department’s concern with such sales isn’t new, but the recent rebuffing by those who are selling their home cooked goods on social media has prompted them to push for more awareness.

“We’ve had some circumstances just recently that’s led us to lead this kind of more in a different approach,” Eager said. “They’re starting to block us from their Facebook pages…and we just have no way of knowing who they are or where to find them.”

As part of that effort, Eager penned an article to the public encouraging people to remember the inherent risks that come when they purchase high risk foods from unlicensed individuals. Particular concerns, Eager said, focus on foods with time, temperature controls where the product requires specific cooking times or heating/cooling conditions to remain to safe to eat. 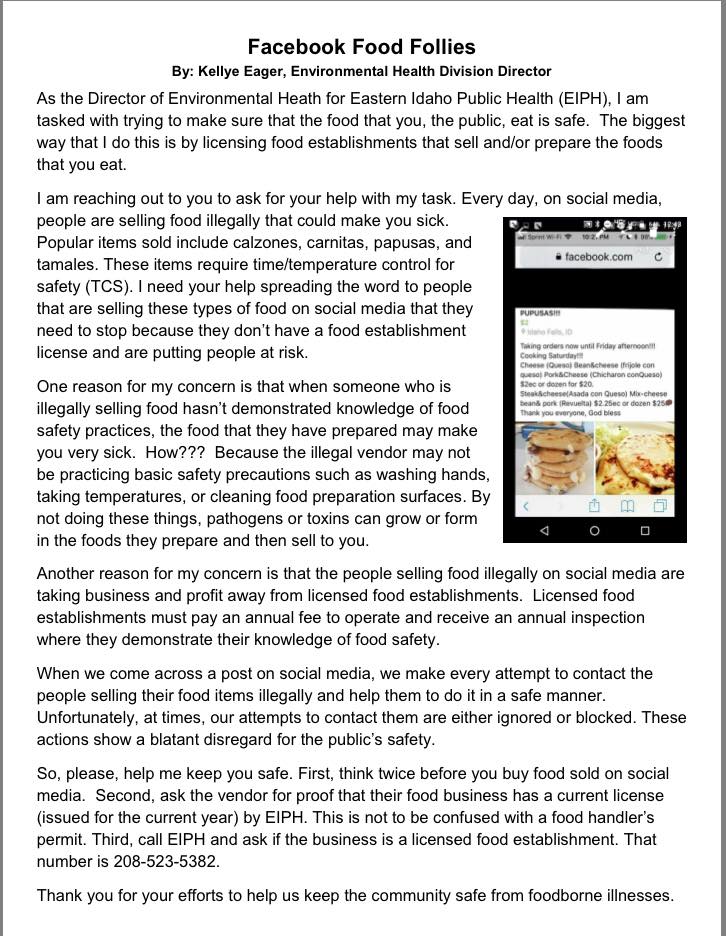 “Popular items sold include calzones, carnitas, papusas and tamales,” Eager wrote in the article. “So, please help me keep you safe. First, think twice before you buy food sold on social media. Second, ask the vendor for proof that their food business has a current license (issued for the current year) by EIPH.”

As far as how many cases relating to unlicensed food sales Eastern Idaho Public Health receives each year, officials did not provide a number. But, said they receive many reports of illnesses each year and cannot always trace the report back to the source of origin.

People in Oregon lose it over new gas pumping law

Oregon is notorious for many things. No sales tax and Hells Canyon, for example. But, it’s also one of two states in the nation where it’s illegal for people to pump their own gas. Recently […]

Mike sits in for Neal who’s recovering from an illness. Julie and Mike talk about the recent passing of President Thomas S. Monson and offer some of their favorite quotes. Represenative Raul Labrador calls in […]

A headline caught my attention this past week, and it lifted my spirits. For the first time since its inception, Facebook lost average daily users late last year, and the time spent using the social […]